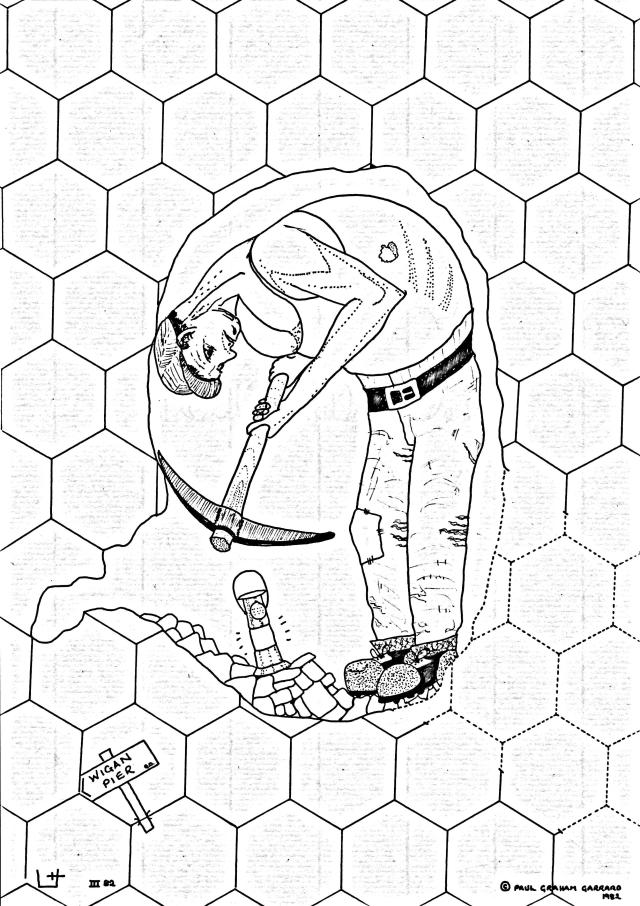 Predictably the work that has influenced my art more than any of his writing, and which I think is one of the best loved stories ever written, is his dystopian masterpiece ‘1984’. In these dark times it is never far from my thoughts. Much of my work is kicking out at authoritarianism and the distortion of truth by the media. Newspeak is dominant.

His essay on ‘A Hanging’ and his writings from the Spanish civil war cemented my pacifism and my belief that the taking of human life to be totally wrong.

Some of my work is overtly Orwellian and obvious and then other times there will be a quite subtle reference. Much of my work deals with oppression, hate and injustice the weapons used by the elite to keep us in our place. The one theme that runs through virtually all of my art is the phrase ‘nothing is ever black and white’. So much of modern life is covered in a veneer. People take things at face value. They think what they are told to think by today’s thought police; – mainstream media.

Nothing is ever black and white, even when it’s black on white my art should never be taken at face value. More often than not I work with very bold colours; I love their richness and the way they shout at the viewer.

I’m not sure I have a single style although much of my work could be best described as surrealist or post-modern pop/punk art. Having said that as far as I’m concerned it’s just me and my art as I rarely set out to consciously produce work in a specific style. When I’m not producing simple line drawings my favourite technique is to build up pictures in layers, sometimes using digital ‘paint’, sometimes using collage and sometimes both together. I’m also starting to work with video.

‘Boy’s Weeklies’ was an analysis of the ‘natural’ form and content of boy’s comic’s, in relation to the social and political context of Britain in 1940.

Orwell’s essay analyses the motive forces behind ‘our’ cultural products, identifying both class relations/struggle and ‘a process of Americanisation’ as critical factors in both cultural form and content. The essay, a critical realist appraisal, reveals the ‘causal networks’ (Brecht) – social, educational, economic – determining British cultural forms. As Orwell notes, the working class readership ‘get what they are looking for, but they get it wrapped up in the illusions which their future employer’s think suitable for them’. Orwell here identifies the false consciousness produced by and within the culture of capitalism.

My objects apply Orwell’s critical realist approach as means to interrogate received narrative and convention. The object ‘Prefab’ (discarded cigarette packet and photographic image) presents a collage/assemblage in which conceptions of the daily life of a Lambert & Butler smoker are juxtaposed with the ‘prefab’ housing of the post-war Keynesian Boom Years. This juxtaposition of found material and generated image explores the interface of the quotidian to the causal network of the State and economic ideology. A Brechtian ‘things as they are and things as they really are’ materialist conception of society. 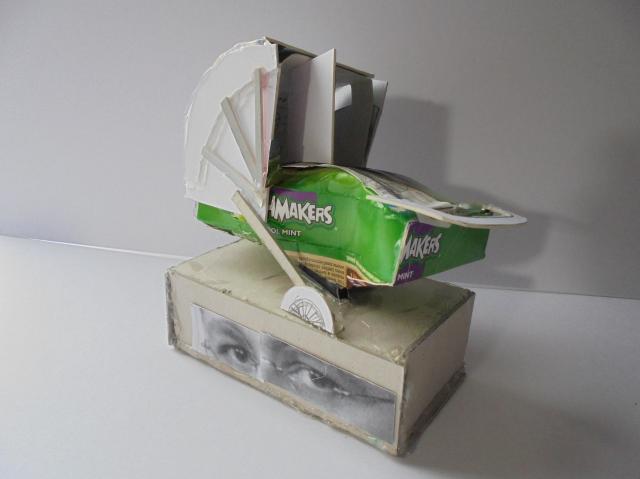 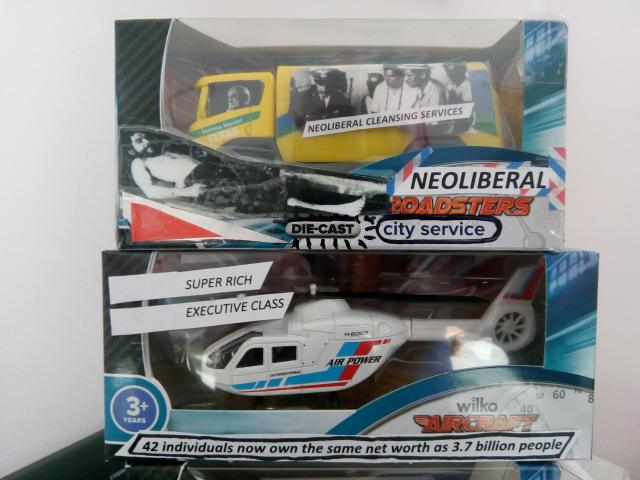 In the midst of capital’s current crisis: mass unemployment as a result of AI, rising levels of corporate and private debt and the $4 trillion invested in non-renewable energy systems, ‘Supermarket’ provides a critical realist challenge to neoliberalism’s dominant conventions and their inability to envision change.

With a specific focus upon Orwell’s essay ‘Boy’s Weeklies’, the objects explore the interface between the totalitising conventions of the dominant social class – commodity fetishism, austerity, financial de-regulation – and the ability of the disempowered to de-naturalise such convention as a means to establish new social forms.

“If you want a vision of the future, imagine a boot stamping on a human face – forever.” – 1984 George Orwell 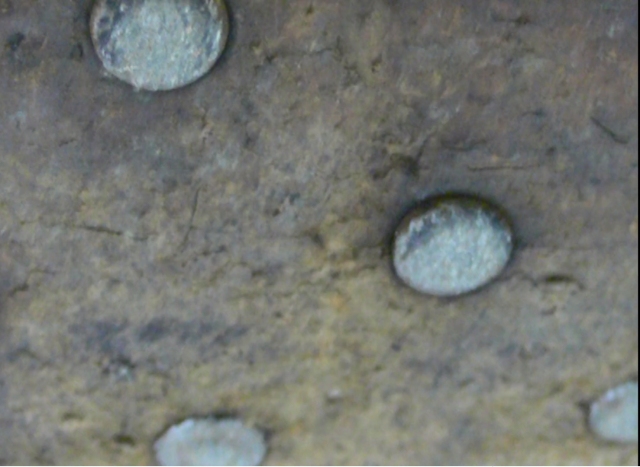 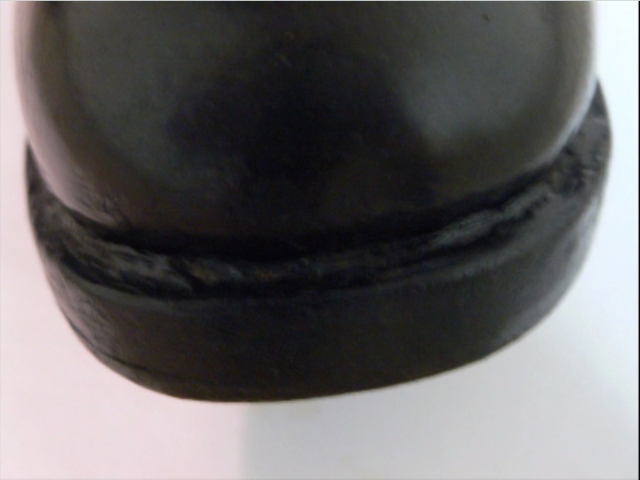 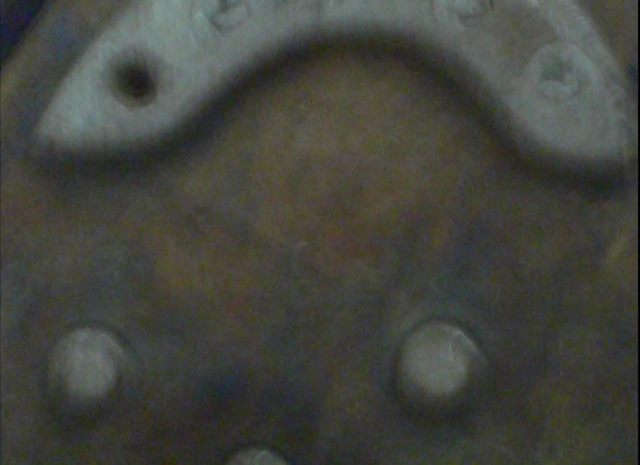 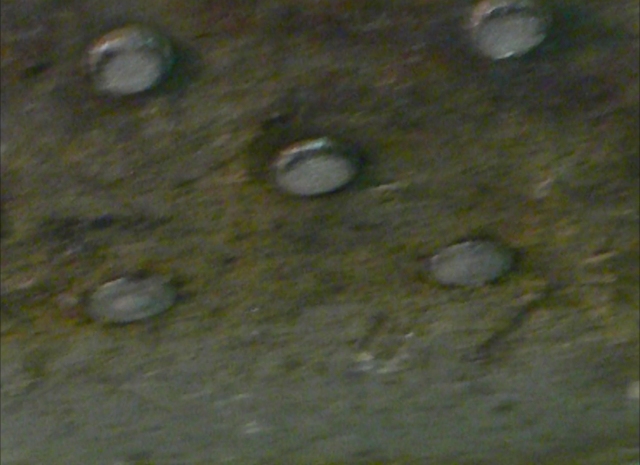 Kerry Baldry works in a range of media including film and video, painting and sculpture. She studied B. A. Hons Fine Art at Middlesex University and  also Film and Video (Post Graduate Diploma) at Central St. Martins College of Art and Design.

Many of her ideas have leant themselves towards the medium of film and video. Films have been shot on 16mm with a Bolex and have used facilities such as superimposition and stop frame often edited in camera.

Aspects of the human condition are recurrent themes in her work. Her films have been screened at various international film festivals and galleries, including BBC2’ s The Late Show (awarded an arts council grant), screenings at the I.C.A., The Lux, The Rotterdam Film Festival. Her film ‘Body’ was  shown continuously on large outdoor screens in 11 cities in Russia, part of OUTVIDEO video arts festival. Last year Baldry’s work was screened as part of Empire II in the Venice Biennale 2017 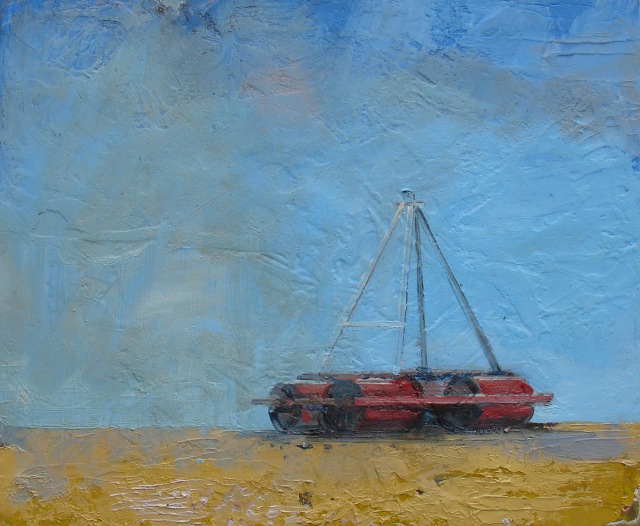 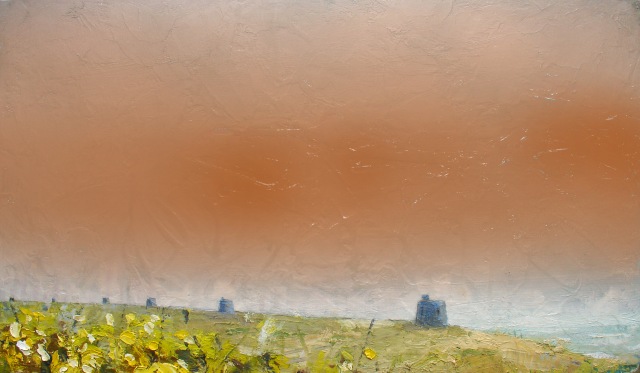 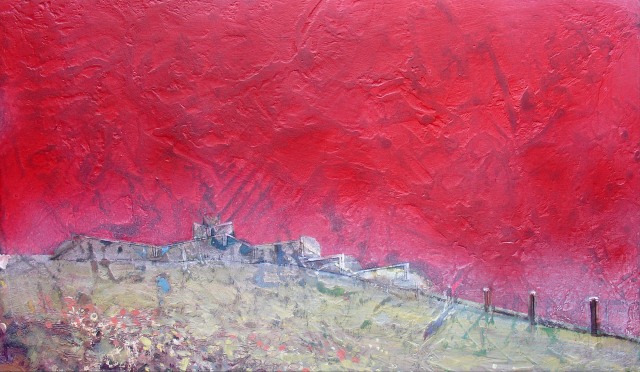 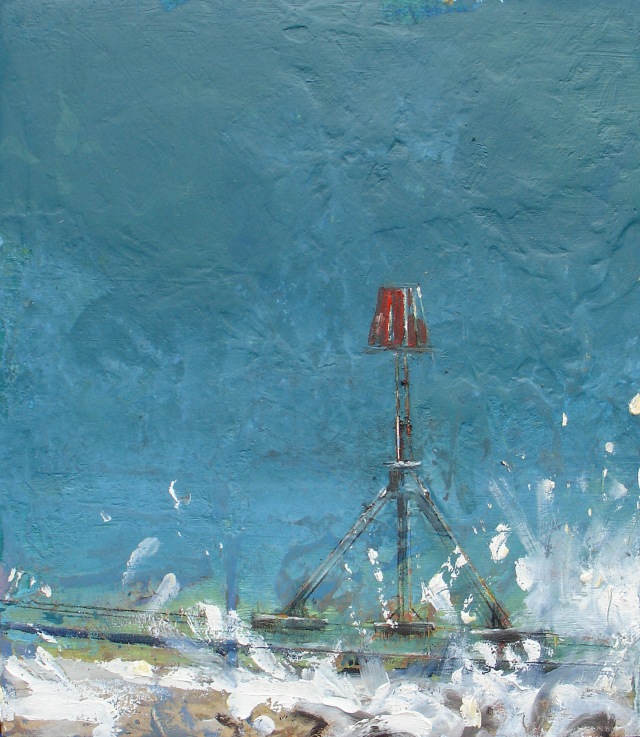 Over the last year or so I have been using isolated monolithic structures as the subjects for my paintings. Initially they were based on and huts and hunting shelters from central Europe and more recently structures that overlook the English Channel at Langney Point on the south coast, the place where I grew up.

The interest was sparked by prevalent ideologies in the build up to and after the EU referendum. I became ever more aware of national borders and why they should be there, why they only favour the people that are in power. I was upset about how I felt the nation had been misinformed by government and about how facts can be twisted and lied about to create fear and uncertainty in the electorate.

Orwell deals with these subjects, particularly in ‘1984’, where histories are wiped out and rewritten and the middle classes are set against each other, while the ‘proles’ are just kept down with no chance of knowing what is really going on.

Now, perhaps more than ever before, people can potentially be tracked and surveyed, as technology takes over every transaction, journey and preference we might show.  These are the things that Orwell recognised within society, and feared, and he saw these first hand as he moved between the various layers of the English class system.

For me the English Channel polarises the different attitudes that he attributed to a border. When I was growing up it was a short journey across a reasonably sized body of water to our neighbours in France, it was closer and more familiar than a trip to the North of England would have been.

In contrast to this there were the physical remains of Roman, Napoleonic and the World War 2 structures  that had been built to defend and watch over that part of the coastline, which ironically are now themed in adventure playgrounds and decorative architecture along that part of the coast.

I was trained in Fine Art at Eastbourne College of Art, Goldsmiths College of Art, London and Jacob Kramer College in Leeds. Since moving to Leeds in the 1980’s I have always been involved with artist led studio groups and worked as a professional freelance artist.

Over those years my practice has bounced backwards and forwards between sculpture and painting and touched on other media in between. Mural commissions and workshops in education in the early nineties led towards many public commissions and community projects that have been the mainstay of my freelance career.

Interspersed between these projects I have always kept up with my own personal work which is now at the forefront of my practice since over the last 5 years I have been investing more time and research in that direction, prioritising studio time for my painting and while searching out worthwhile exhibiting opportunities.

all Artist’s submissions on this theme will be posted on this blog-site. The aim is to provide a bank of high quality, innovative artwork from which any venue or gallery will  be able to select work for an exhibition on this theme. By submitting, you are allowing images and descriptions to be used to promote the project through social media and direct correspondence with any interested gallery. Submission is free; there will be a hanging/administration fee when the opportunity to exhibit arises.

3 Images in jpeg, about 1mb file size. [Work in progress is welcome at this stage]

a] brief biography, and